The one and only Kosmopolit

… is a typewriter! I must admit I was not aware of this when thinking about a title for this blog. The original Kosmopolit was invented in 1887 in Hamburg and had one amazing feature: the type style could be changed into other alphabets (like Cyrillic!). Indeed truly cosmopolitan…. 😉 I don’t know if anyone else has ever blogged about a typewriter but somehow it is fascinating to see the technological development from Kosmopolit (original version 1.0) to Kosmopolit (2.0 but always beta) in the last 100 years! 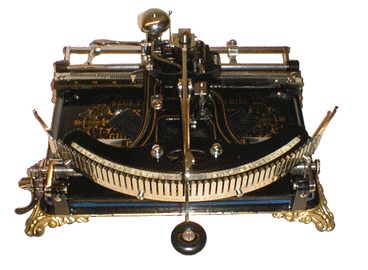 And I must admit, some of the facts about the Kosmopolit typewriter could also be said for this blog (except the thing about the English insurance office). I also would never call my writing clear and beautiful … well, for the time being, I just hope I will not end up producing pencil sharpeners… But please read the facts:

The Kosmopolit found only a limited market, but where it was used, it was prized for its sturdiness and for its beautiful, clear typing. It was exported to several European countries, and according to Ernst Martin, it was still used for years after the turn of the century, especially in English insurance offices, to prepare “beautiful” documents. Manufacture must have stopped around 1902-1903, for the last advertisements for the Kosmopolit date from 1903. The Kosmopolit was the last typewriter produced by Guhl & Harbeck; the company later produced one more notable item, the Jupiter pencil sharpener.